Best Dart Tosser in the State of Maine 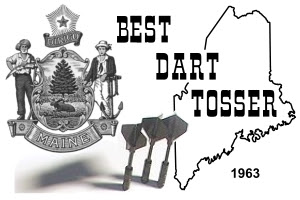 As a youngster Growin’ Up in Maine, I once witnessed a sports challenge with bragging rights and a lifelong lesson. As adolescents, 3 male friends and I were comparing notes on sports heroes like Mickey Mantle, and arguing like the dickens. It was a gorgeous summer day in Derby, Maine, and the topic suddenly turned when throwing darts came up. The shortest of our group decided to pump up his reputation and blurted out “I am the best dart tosser in the State of Maine”. The raised eyebrows, a few nyuk nyuk nyuks and then total silence demanded a comeback, so he added “…and I can prove it!”.

Being the best in Derby, population 300, or even just Piscataquis county would have been enough, but the entire State of Maine? What happened next was one of those unforgettable moments of small town living. The dart tossing jock called out to his 10 year old sister who was playing not far away, and she came running. To our surprise she immediately complied when told to stand up against the barn door and spread out her arms. She never flinched as he lined up his aim from about 15 feet away while holding the first dart next to his nose.

Our doubts began to melt away. Perhaps the spectacle of a future champion dart tosser was in the making, and only his sister knew the secret. As the champ reared back and let loose, the quiet tension broke as little sister took a dart straight to the shoulder and ran home with a steady blood curdling scream. Don’t try this at home. It wasn’t fatal, dumb maybe and stuck solid, just not fatal. For the sake of decency and a matter of pride, names have been omitted.