Life on the Farm in Monson Maine

Life in Maine at the turn of the century was hard. I don’t mean the latest century, but from the 1800’s into the early 1900’s. The homes shown in the photographs below were built by Lars Fredrik “Fred” Degerstrom, my great grandfather, who emigrated from Sweden in 1881 with his siblings, wife Matilda, children, and parents Nils and Maria. Matilda was pregnant with my grandfather, Oscar, born soon after arrival and the first ancestor born in America. 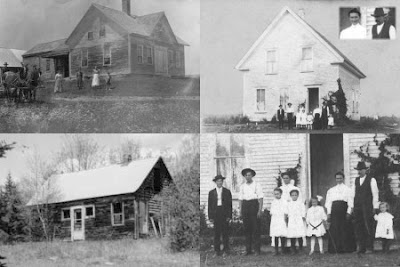 Fred built all 3 homes, and the family group (lower right) pictures 7 of his 11 children. The first house (upper left) was known for having the largest barn in Monson. The home was struck by lightning and burned flat.

Fred rebuilt a smaller house across the road (upper right). Years later it was struck by lightning and burned flat. By this time the children were grown and gone, so Fred and Matilda abandoned the homestead and lived in Dover with their eldest daughter, Edna. In time Matilda was homesick for the farm, so Fred built the third very small home (lower left) where they lived until his death in 1938.

Ship records show the family left Malmo, Sweden for Bangor Maine on September 15, 1881. The very ship that brought the last of the Degerstrom family from Sweden to America sank on the return trip and all persons aboard perished in the Atlantic Ocean.

That last fact came from an incredible source. My grandfather Oscar died in 1953 at age 72. During a Swedish event in Monson in 1996 people were invited to speak, and I told about my family history research and the Monson connection. I was told a “Degerstrom” was in the nursing home in Dover Foxcroft, and we found her later that day.

Gladys Degerstrom turned out to be Oscar’s sister, still living 43 years after his death. Born in 1900 and very sharp at 96, she provided many details of life on the farm in Monson, Maine, including the ship that sank and the names of the two horses in the upper left photo, Betsy and Doctor. Another photo of Gladys (center and front in the group of 4 above) and stories she told may be added later. Incidently, she outlived her children and some grandchildren!