Anaheim, CA, Sept 7, 1992 – Mike Bordick from Maine, and golden glove shortstop for the Oakland A’s, hit a blazing line drive foul ball into the left field stands into the waiting hands of Jim Degerstrom, also from Maine. Degerstrom’s claim of catching the foul ball was later corrected by his lovely wife “You didn’t catch it, or you’d be missing a finger or two. You retrieved it after it flew by like a rocket, bounced off an empty seat 20 feet away, ricocheted back in a high arc, and dribbled up and down right under your chair. Still sitting, you bent over and picked it up.” 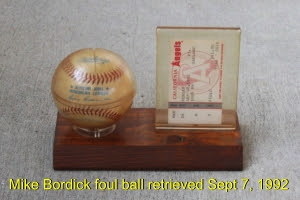 Here’s a photograph of the baseball obviously rubbed by the pitcher in red dirt, and still waiting almost 15 years later for a Mike Bordick autograph. That’s the game ticket next to it. Any readers who know Mike or how to reach him please email me. An autograph would be a great final touch to this momento. If you live in Maine you probably know Mike Bordick, or so some people would think. Please continue.

Now on to Mike White. In 1968 I was away and having a casual conversation with a guy in New Jersey. When I mentioned that I was from Maine, he asked “Do you know Mike White?”. Huh? What do people think!!? I was too dumbfounded to speak at first and just froze with eyes glazed over and my mouth wide open. I recovered and replied “no”, and went on to explain the population of Maine is, was, and will probably stay around 1 million. Double that during tourist season and I never met Mike White.