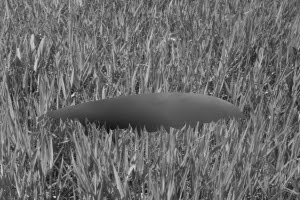 Things formed by nature were familiar to my group of friends Growin’ Up in Maine in the late 1950’s. After years of playing Down Back and exploring every corner of the great outdoors, you eventually recognize and perhaps named many obscure objects. As teenagers we knew every trail, maybe 100 trees or more, rock formations including those on the bottom of the river, and a variety of nature’s treasures that might be overlooked by the casual observer.

Some adventures involved crossing pastures which were usually unoccupied. If you found a herd of young bulls, the game of the day became fence sitting and taking turns calculating how far to go into the field. A stick was carried by the first person to mark progress as they approached the herd. Timing had to be perfect to recalculate distance for outrunning if the bulls charged. The winner was the last to move the stick.

Then there were other days and empty pastures to cross. On one occasion and with 3-4 boys present, we came upon a rock, a mystery rock, in Goulds pasture. None of us recognized this rock about 3 feet long and barely sticking out of the ground, even though we passed this way 100’s of times. The rain had been wicked the last few days, so I was thinking erosion as I jumped on feet first and plunged up to my knees through the rotting hide of a dead horse buried in a shallow grave. She was fresh dead and bloated, and needed about 4 more feet for a proper burial. Dang that lazy farmer!

If you or your dog were ever sprayed by a skunk, or near someone who was… this stink was worse. Much worse.