Typing Champ for a Day 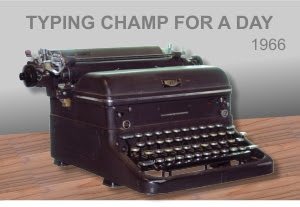 One of the best choices I made in life was Beginners Typing class in high school in 1966. Who would have envisioned $5000 computers 20 years later and then a $500 price tag another 20 years after that? For me typing 60 words per minute comes in handy as a full time website designer who writes all his code in a word processor.

Early in my senior year at Milo High School in the fall of 1966, the typing teacher announced a contest to determine the fastest typist. The rule was simple. On the command “1-2-3 Go”, we were to type the alphabet backwards and then upon completion raise your hand and yell “done”. The first one to finish without errors was the champion.

Tappety tap tap tap and 60 seconds later I raised my hand calmly stating “Done!” as the class broke out in protest yelling “Impossible!”… “No Way!”… “You’re kidding!” and the teacher approached and pulled my paper from the typewriter.

A moment later while beaming a huge smile she announced “Jim did in fact type the alphabet backwards, and there are no errors. He is the winner.” Now the protests got ugly! Continuing as she held up the paper the teacher explained “He typed the alphabet from a to z first, did 3 carriage returns, and obviously viewed the top line as he typed the alphabet again only z to a.” Despite the really ugly protests I was declared the typing champ for a day.