Fool and His Bike on Derby Hill 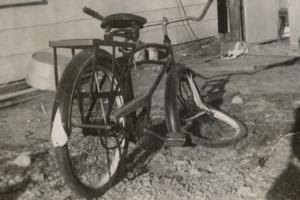 The bicycle photograph shown here gives away the ending of this episode of Growin’ Up in Maine, so I’ll just work up to the lesson learned. Some mistakes are only made once. This one was during the summer of 1960 at age 11.

Grandpa and Grandma were visiting and just left for home when I first devised my “Hey, Bubba… watch this!” spontaneous (famous last words) plan. Having never rode my bike to Milo I would take the side roads up Church Street and Daggett Street to the top of Derby Hill and then get up to top speed to head ’em off at the pass.

The thrill and excitement of wind in my face at 30 mph ended at the bottom of Derby Hill when I hit the railroad tracks which happened to cross the road at a 45 degree angle. The front tire locked in the first groove of sunken track and jerked to the left as fool and bike went skidding along the pavement.

The only things crushed were the bike and my pride. Derby was a railroad town with many crossings. Every set of tracks on the village side of Derby Hill were roughly perpendicular and straight across the road. That first trip on a bike down the backside of the hill turned into another of many mistakes I only made once. Almost 50 years later I still notice the angle of tracks that I cross by car.