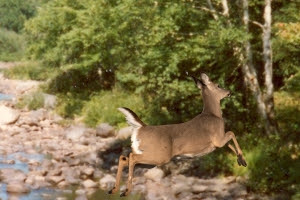 The owner of the hardware store uptown in Milo, Maine, was as wise as one might expect when it came to subjects of everyday household fixing. Between customers he was quick to dish out expert advice on a variety of topics. As a teenager back in 1965 I had the pleasure of a long winded lesson after mentioning deer hunting.

Following a brief tirade protesting the ignorant hunters like outta staters shooting black and white cows and then the antics of some of the local morons, he launched into his version of what he called his “schedule for hunting deer.” Huh? Schedule? Like an appointment? Within minutes I figured out his country verbage actually meant “method” or “strategy”, so as he repeated the term “schedule” several more times I let it slide without interrupting.

The speech took about 30 minutes and in essence he stated it was foolish to shoot at a deer on the run because you’ll miss and they won’t run that far. Track ’em quietly and before long you’ll have the chance to shoot ’em standing still. My counterpoint that a scared deer might run half way to Canada was dismissed as foolishness. Anyway, the story ended when I asked how many deer he bagged using his schedule, to which he replied dry as you please “I ain’t never been deer hunting.”