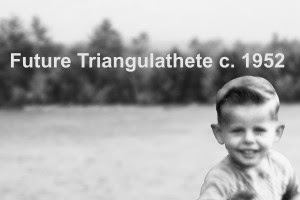 Grownin’ up in Derby Maine 50 years ago meant inventing entertainment of various sorts. You may be surprised with the different toys one could make from an empty cereal box. The round Quaker Oats box made the perfect drum for youngsters living in a family of 8 kids on a limited budget. Another favorite invention was sports.

The now (almost) famous sporting events held each summer at the old swimming hole Down Back in Derby, Maine, included the triangulathon. I just Googled that term, and it appears I’ve coined a new word, so I best do a definition and tag it in Technorati to stake my claim to everything in the known universe about triangulathon.

Triangulathon: An aquatic competitive event that is not official unless performed in Derby, Maine, and consists of diving from the old swimming hole rock at the edge of the Sebec River and remaining submerged while swimming half way across the river to middle rock, turning upstream and continuing underwater to standing rock, and finally back to the old swimming hole rock while still submerged to complete the triangle in one breath.

The first leg and third leg are at a slight downstream angle, so the upstream segment is the most challenging. Middle rock is a flat slab and fairly large at about 6 feet across, plus light colored which is easy to find swimming underwater. The upstream destination, standing rock, is dark and the size of a large beach ball, so finding it while fighting the current adds to the level of difficulty.

The triangulathon is not a timed event. It is, however, a spectator sport. Watching a competitor lost and going in circles on the second leg is hilarious if you have a warped or dry sense of humor. Finally, you need not ask. I am an official triangulathete.