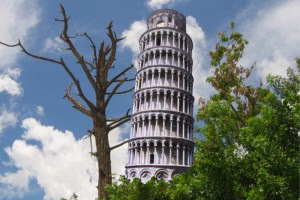 Rome wasn’t built in a day, but around 1960 a group of friends and I, aged 12 to 14, did build a magnificent 8 story treehouse in one day. The location was a stand of trees in an open field between the railroad tracks and Church Street in Derby, Maine. We were like an army of ants cutting, measuring, and hammering old lumber. The skyscraper started with one floor, four walls, and the roof which became the floor of the next level.

The design was approximately 6-8 feet wide with a variety of windows and doors, and each story was about 5 feet tall. We included a few escape hatches to crawl between floors, and a crude outside ladder. At 4:00pm the daily parade of traffic from the Bangor and Aroostook Railroad Shops had just begun as we finished the roof of our 8 story treehouse. We eagerly awaited the arrival of the railroad working Dad of two of the boys in our construction crew because the site was about 40 feet behind their house and garage.

Our sense of achievement took a turn for the worse as the Dad took one look and announced he did not own the property, and we must ask permission to keep the treehouse there. Furthermore, he informed us the land belonged to a neighbor who we knew as a cantankerous old man. He lived alone, and was best known for his slurred speech and staggered walk.

One of the older boys agreed to go ask, and returned with his chin on his chest and kicking dirt. The treehouse came down the same day. We were unable to capture it on film, so I opted for creating an illustration with a similar 8 story structure said to exist somewhere in Europe.