Running Away from Home 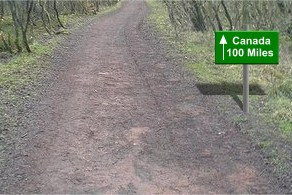 The particulars of the offense in the summer of 1954 elude me, yet at age 5 I adamantly announced I was fed up and running away from home. The bicycle trip was less than 150 yards to the 4 corners at the bottom of Derby Hill near the old grammar school as I began to question the wisdom of the unfolding drama.

I realized how dumb I felt being broke and hungry with nowhere to go. Eating crow would have been easier if I simply went for a bike ride without announcing my intentions. All Mom had said was “Okay. Goodbye.”

Turn left and the Ferry Road was a dead end at the Piscataquis River. Turn right and the wicked climb up Derby Hill meant walking the bike past a dozen homes and the scrutiny of neighbors who might turn me in to the authorities. Go straight ahead about 4 miles past a half dozen homes or farms on River Road, and it was 100 miles of wilderness from Derby to Canada.

Whoever invented that count to 10 rule when you’re under stress was a genius. Try it. We had pork chops that night.