People with All the Answers 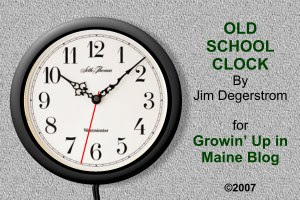 As a child Growin’ Up in Maine, there was no end to practical jokes and some were simply a right of passage like tricking a young boy to pee on an electric fence. I fell for it once. Years later as an adult and working in electronics, I encountered a technician who falls into that category of “People with All the Answers”, and decided he needed a taste of good old Maine humor. You may not believe the results! It didn’t backfire but it did leave me dumbfounded.

This goes back to when battery operated clocks were first introduced, and I set one up for what I thought was the perfect sight gag. The clock for the prank looked like the old schoolhouse clocks that us oldtimers remember from the 1950’s. The effect was created by taking an old electrical cord and taping it to the back of the battery operated wall clock, and then dangling the plug so it would only reach about 6 inches above the wall outlet. Got it? It was not plugged in, yet the second hand was going tic-tic-tic.

Next, I called the know-it-all to explain this mystery of the ticking clock that wasn’t plugged in. With arms crossed while looking up and down and stroking his chin, he was not puzzled for even a moment! Instead, and just as serious as can be, he broke into an absurd theory of static electricity buildup much like the charge in a battery, and other mumbo jumbo, and he insisted that those conditions can make a clock run. To my delight everyone else was very puzzled without an explanation, but this guy could not admit “I don’t know”. Perhaps I should have asked him to plug it in!