Missed Snowing in July in Maine 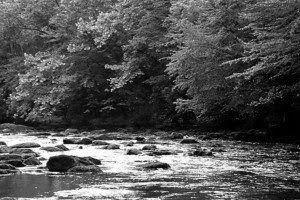 The West Branch of the Pleasant River was one of my favorite streams for brook trout fishing in Central Maine. We just called it West Branch, and it’s near K.I., the Katahdin Iron Works, north of Milo between Brownville and Millinocket. You had to pay less than a dollar at the K.I. gate to get to the stream.

I’m sure it’s more today. Rumors there’s a loan officer on site if you come up short may be exaggerated.

The year it missed snowing in July in Maine was around 1964, and on June 30th my Dad, a friend, and I were fishing the West Branch for trout. The best method was wading the stream rather than fishing from the bank. The low depth and slow speed of the current made that practical even for youngsters. Otherwise, the thick trees and overgrowth made fishing from spot to spot on shore nearly impossible, so trying your luck right down the middle for a mile or two worked best.

That particular June 30th was warm and sunny most of the day when a dark cloud drifted in and dumped enough snow in 15 minutes to blanket the ground. It was bitter cold and most everything was wet including us. The truck was parked back a mile upstream, so we lit a handkerchief trying to start a fire without any luck.

Within a half hour the snow melted away and was long gone. Despite being wet, cold, and miserable, we continued wading for brook trout. If that instant blizzard happened a day later I would have witnessed snow falling in Maine in July.