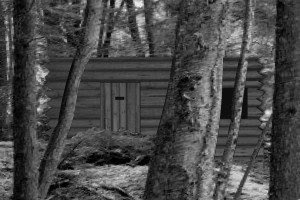 Besides building log rafts at the old swimming hole Down Back in Derby, Maine, my friends and I were adept at building rustic log cabins, as well. One summer in the early 1960’s three of us teenagers chose to build a cabin in the big woods west of Derby Hill.

The woods Down Back were perhaps a mile long by a quarter mile wide between the railroad tracks and the Sebec River. West of Derby Hill was as long but stretched for miles towards Canada and provided more space to hide our cabin from potential vandals. Ayuh, it was a problem even back then.

As we spent days clearing trees and then started on the foundation, one of the two friends began making excuses for avoiding the hard work. He wandered off after announcing he’d take care of the outhouse which would be a necessity before long. Carrying a board, a hammer, and some nails he was back an hour later having gone but a couple hundred feet from the clearing.

He was rather proud after mounting one board between two small trees claiming it was solid as a rock and perfect for taking care of business. Grab the two trees with the board to your back, and you could hop up comfortably with your butt hanging off the backside. Next he announced he was going home for Kool-aid and then back in an hour or two. It should have taken 30 minutes.

In his absence the two of us discussed his melingering excuses to avoid real work, and decided it was time for some outhouse revenge. We removed the board and carefully drove a dozen finishing nails barely through the board in the shape of a half moon allowing perhaps an eighth inch to protrude. We made sure it was just enough to capture attention without any serious damage. The board was remounted between the two small trees ready for him to take a seat.

Upon his return, we invited the friend to demonstrate his invention, and he was happy to comply. Here we were drenched in sweat from all our hard labor, and he had nary a drop. Leading the way he commenced to braggin’ as he showed off his handiwork, stating “Ain’t she a beauty?” as he slapped his hand down on the board for emphasis. He was still howling as we collared him demanding an equal share in the labor for equal rights to ownership once the cabin was done. He agreed. We finished in record time.