Running of the Bulls in Maine 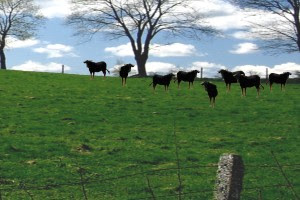 As kids Growin’ Up in Maine my friends and I were quick to invent new games. The running of the bulls in Maine was a summertime event held in Derby, and unlike the more famous counterpart in Spain, we had no spectators.

The dozen or so bulls used for the run were held in a pasture on River Road, and our group of youngsters would sit on the outside of the fence looking in. These beasts were frisky, young and mean, and crossing the pasture without knowing they were there could be a deadly mistake. Here’s how we played the game.

We began with a sturdy 3 foot stick for a marker, and then took turns hopping the fence and approaching the herd to the maximum extent of our bravery. The stick was plunged upright into the ground and then the athelete would run like the dickens back to the fence. Next in turn had to retrieve the stick, approach closer, and then plant it again before making a retreat.

The challenge was keeping an eye on the bulls and then calculating your distance and footspeed to the fence compared to the opponent to avoid being trampled. The winner was the last to plant the marker which was usually followed by a close call at the fence as we ran out of volunteers. Now that’s entertainment for small town country boys!