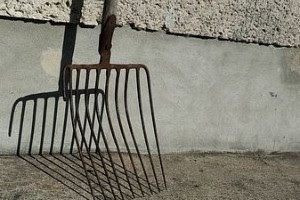 Late summer Growin’ Up in Maine often meant an invitation to spend a few weeks on my uncle’s dairy farm off Stillwater Avenue near Bangor. People work hard and eat well on a dairy farm. In the mid-1950’s I was too young to be of much help with the real work, yet dipping a hand in a bucket of boiling water before cleaning an udder in preparation for milking cannot be forgotten.

At age 8 or 9 the hands are especially sensitive, but eating well meant helping with the chores, so I did it. Being from a family of 10, I looked forward to each hearty breakfast and supper with that unlimited supply of fresh milk.

One summer an older brother came along for the visit, and between the morning and evening milking times we found lots to do around the barn and farm. There were plenty of places to explore for hide-n-seek, and I displayed my ignorance of country living in one instance. My brother chose a tall haystack for a hiding place and remained unseen deep in the hay and was the last to be found. A loser pointed to his location, and I volunteered to help him out by digging with a hay rake as pictured.

I am not sure who was more ignorant as I announced my idea. My brother mumbled agreement as I began slowly scraping the hay away, and then became impatient plunging the rake into the haystack to speed up the process. That shot broke skin and drew blood on his forehead, so the game and my volunteer work were over. It’s a good thing for thick skulls to offset a lack of childhood common sense.