Growin Up in Maine Audio Discovery

Posted on September 8, 2008 by Jim Degerstrom 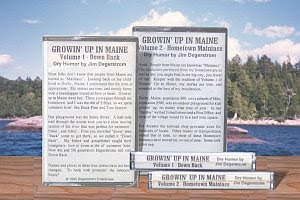 For readers wondering about how the Maine stories presented as Growin’ Up in Maine began, the idea was conceived long before the launch of this blog in 2007. This past weekend I was doing spring cleaning and tossed two truckloads of stuff which lacked any good reason for keeping. Spring cleaning in September you ask? Ayuh, being an expert in procrastination this was spring cleaning scheduled 5 years ago.

Amongst the treasures worth keepin’ was a Growin’ Up in Maine audio discovery as illustrated in the graphic shown. The two audio cassette albums entitled “Volume 1 – Down Back” and “Volume 2 – Hometown Mainiacs” (and then both subtitled “Dry Humor by Jim Degerstrom”) are from a Growin’ Up in Maine series I recorded in 1995, and since forgotten until now. The albums took place in California where I bought studio recording time, high quality cassette production services, and then insert printing and shrink wrap. The inserts announced 6 in the series though the last 4 never did get recorded, and those stories eventually became this blog.

The dusty box had a handful of volume 2 with about twice as many volume 1, and all in the original shrink wrap. The idea at the time was I sent copies to relatives Down East to offer to shopkeepers, and maybe have them on consignment for tourists to buy. Any dreams of being the next Bert and I disintegrated as those relatives balked at pitching the tapes and now 100’s lie in dusty attics or landfills.

This discovery with 12 stories on each volume was interesting as I compared story titles to the currently published blog stories. For now 16 of the 24 stories have been presented here, so 8 from those cassette albums are yet to be told. Unlike the blog, perhaps the downfall of the albums was I named names without apologies, and the demise may have prevented legal consequences for lack of a “no resemblance to persons living or dead” disclaimer.