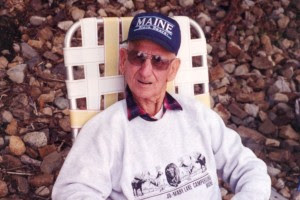 Introduction:: In this fishing story of Growin’ Up in Maine Dad reveals the name of the highly guarded secret fishing hole known as Spring Brook Deadwater where insiders fish for Maine brook trout.

Maine fishermen remain tight lipped about the location of this secret place to catch some of the best native Maine trout.

This is one in a series of guest stories by my late Dad, Ted Degerstrom Sr, and some others will feature Mom, Blanche Degerstrom. While Dad describes the “what” about Spring Brook Deadwater, please wait before wasting time looking for it because Mom will reveal the secret of “where” in the next episode.

Listen now and hear this old recording entitled Fishing Secret of Spring Brook Deadwater, or read along with the transcript below. (Time: 01:49 min:sec):

No. I’m talking about a spring in about ahhh an area a little bit bigger than this carpet right here… and just white sand, and that water ice cold. That water boiling right up out of that white sand and just as clear as a crystal.

I went fishing up there and stayed overnight… with… ahh… remember Everett Black?… remember Cold Turd? You don’t remember him? They lived up on top of Derby Hill. Geez whiz. I’ll never forget the time riding home and we had them nice trout.

This ahh… old Doctor Bundy… Dr Bundy: “Hi Degerstrom, did you get any trout?”… said “Yuh”, and Cold Turd said “Show him”, so I opened up the bag.

Nothing any more beautiful in the world. He says “Ohhhh, you couldn’t give me a half a dozen of them could ya?”

I says “No, I couldn’t”. Hah! Heh! After going… going through all that… heh! Secret place. Nice trout. Spring Brook Deadwater. (the end)

Closing comment from Jim: This was recorded around a campfire at Jo Mary Lake campground near Millinocket, Maine, and you may hear the fire crackling in the background during the telling of this story.

While Dad remained coy and elusive about giving directions to Spring Brook Deadwater, Mom spills the beans in the next episode. Stay tuned… you just might find out the given name of “Cold Turd”, too.