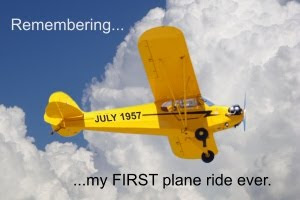 While growin’ up in Derby, Maine, our idea of excitement in 1957 involved the simple things in life, and especially adventures related to nature. Sometimes everyday activities became the chance of a lifetime as some sneak up to turn a moment into a memorable event.

Derby, population 300, had no airport. Milo did if you count that grassy strip near the drive-in theater on the edge of town. That’s where I took my first plane ride ever in July 1957 in a single engine Piper Cub at age 8.

The drive-in movie theater and Milo Municipal Airport (kidding about the name) were near the home of my grandparents on outer Elm Street. A chance visit to see them while a man was giving plane rides nearby was truly a rare opportunity in a rural small town. A day later and that field was just a field again. When asked I did not hesitate!

The excitement and view while flying at 2-3000 feet for 10 minutes was an unimaginable thrill. Prior to the plane ride the closest I came to a bird’s eye view of the world was 50 feet up near the top of a pine tree. Since that experience so early in life I’ve never known fear on any carnival ride.

I could not imagine back in ’57, yet the next ride in a Piper Cub would be 14 years later over Laos on Air America, the airline of the CIA in Southeast Asia. I cannot reveal details of that mission, yet by comparison and as a child on that first plane ride ever, in 1957 we didn’t worry about people shooting at us. Despite the circumstances and compared to jets, I still liked the thrill of that plane ride, too!