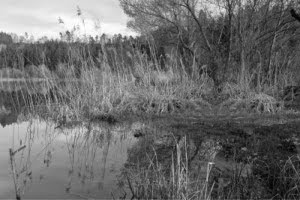 Lake Edith in my childhood home town of Derby, Maine, won’t be found on any map or Maine Atlas. The 50 foot by 200 foot lake was actually man made and situated at the south end of the park near the B&A Railroad Shops. Kids called it Derby Pond, and we were usually ice skating there by Thanksgiving.

The photo shown is typical of natural ponds and small bogs that provided alternate places for ice skating. A bog within 500 feet of our home on Railroad Street had water trails through alder trees that made for a great game of tag on skates. Others included small ponds in pastures like one I recall within a mile of home near the saw mill on the River Road.

Ice skating on Derby Pond was close and convenient, and ideal for countless hours of enjoyment by kids from Derby and Milo. Stacks of used tires from gas stations were burned for lighting and provided some warmth. There was a springhouse building with a brass water tap and spring water running 24/7. The enclosure was more like a mini 6 foot square gazebo with a roof.

Looking back I realize that the fun we had, including falling time after time on the cold hard ice during games of tag or hockey, took a toll that I can now feel in my knees and joints. I have no regrets. The childhood fun was well worth it.