The Torpedo Incident of 1959 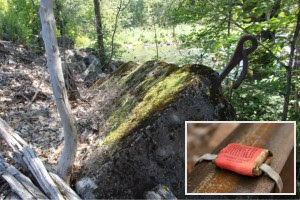 Memories of Growin’ Up in Maine reveal flirting with death foolishly more than once. Readers may recall a previous close call while running spring river rapids on a log raft with 1 of my 4 brothers. He was also involved in the story about ice skating on thin ice to see who could make a skate mark closest to open water near the middle of the river.

After first reading about our idea of fun for the first time here, Mom was thankful our death defying childhood tales were kept secret for nearly 50 years. She did, however, ask “Which brother?” though I still refused to name names. I’d guess by now she figured it out or extracted a confession from my fellow conspirator.

Besides danger, those examples and this story of the torpedo incident of 1959 took place near the iron bridge over the Piscataquis River which forms the southern border of Derby, Maine. “Torpedo” you ask? Yes. Some friends and I found one and detonated it.

To better understand, the railroad used a warning device they called a torpedo which was an explosive device 3 inches wide and strapped to the rail by a flagman. The photo inset above shows a train torpedo with 2 lead straps attached to a rail. When run over by a train the explosion was a warning for the train engineer to slow down or stop.

The large granite block shown in the photo was one of several leftovers scattered near the railroad track embankment after construction of the iron bridge in 1927. After finding the torpedo, and considering fireworks were illegal in Maine, trying to set it off on the granite block seemed like a good idea.

One friend, a newspaper boy with experience tossing stuff, placed the torpedo on the granite and began throwing large rocks at it from 10 feet away. The other friend and I stood to the side and behind the pitcher. On about the 4th or 5th try it went off. The explosion was deafening. Literally. All 3 of us lost hearing temporarily, and spoken words sounded like the cartoon character Chipmunks.

The pitcher, being closest, took the brunt and besides hearing problems was later hospitalized for powder burns to his eyes. He healed just fine although it did take 3 days for normal hearing to return to all of us. This was one dumb stunt I couldn’t hide from Mom, and a lesson well learned.

Being fortunate enough to survive the torpedo incident of 1959, and not counting military service, we never again tested our mortality with explosives.