80 Years Without a Championship 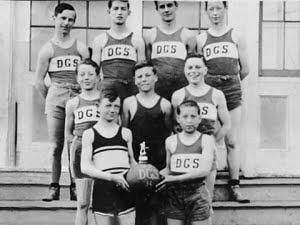 As a child in the 1950’s and early 60’s, our choices of Maine sports teams to support were limited to high school and college athletics. Imagine my Dad being born in Maine in 1920, and having lived 80 years without witnessing a pro sports championship while cheering for New England teams.

He did win at least one sports championship. The photo here shows Dad, Ted Degerstrom Sr. (top left at age 16), and other classmates on the 1936 Championship basketball team standing on the front steps of Derby Grammar School in Derby, Maine. No one would argue his love of sports.

The Boston Red Sox baseball team was the nearest pro sports franchise with favorite stars like triple crown winners Ted Williams who won in 1942 and 1947, and Carl Yastrzemski, winner 1967.

Williams was active before my time, and the last player to bat over .400 in a season. He had 20/10 vision, and once said he could see individual stitches on baseball seams spinning towards him, and then react to the type of pitch. Later in life he admitted that despite his remarkable eyesight, the earlier statement was exaggerated to intimidate pitchers.

As far as NFL football teams near Maine in the 1950’s and 60’s, the NE Patriots did not exist. We cheered for the NY Giants and remember the glory days of Hall of Fame quarterback Y.A. Tittle. I still favor the Giants in the NFC and Patriots in the AFC, and look forward to the rematch next month in Super Bowl XLVI, especially after the Patriots 3 point loss to the Giants in 2007.

Dad liked the Giants in the early years, yet favored the New England Patriots since they began in 1970. Again, he passed away before the Patriots Super Bowl wins of 2002, 2004, and 2005. However, he never lost his passion for sports despite that 80 year dry spell without a Red Sox championship, and the 30 years cheering for New England without a crown.

If fanatical is the definition of fan, Dad was a real fan of New England sports teams. I share the sentiment. Go Sox. Go Pats! The Celtics and Bruins are tops, too.