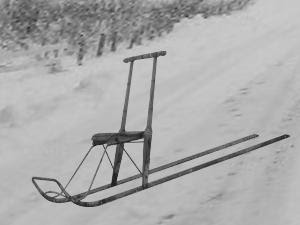 Winter in Maine this year has been short on snow which is unusual compared to my childhood in the 1950’s Growin’ Up in Maine. A favorite childhood activity when snowplows couldn’t keep up, and 6-12 inches of fresh snow covered the streets of Derby, Maine, was Scandinavian kicksled winter fun.

From the Catholic Church in Derby, the hill down Daggett Street was steep for about 100 yards before making a sharp right turn. Most kids would ride regular wood slat sleds going solo while staying flat on their stomach and using the front handles for turning.

Others, and depending on the size of the sled, would ride with 2-4 kids sitting upright with the front daredevil steering with their feet.

The Scandinavian kicksled shown was an interesting alternative to normal sleds set low to the ground. These were used in Sweden, home of my ancestors, and our family owned one. The driver would stand on the two back rails and hold onto the cross bar.

On flat ground, a person would move by standing on one rail and pushing against the snow covered ground much like kids today propel a skateboard. You could pick up speed by running between the rails and jumping back on if you wanted to coast for a short distance.

The seat shown at the front of the kicksled was for moving supplies or transporting a person in ancient times. The back rails were flexible, so the driver could push left or right to steer the kicksled. Pushing out on both rails at the same time worked like brakes. Braking was in important skill for coasting downhill.

Our generation used the family kicksled for fun, and usually solo unless someone was foolish enough to ride up front.

Regular sleds picked up plenty of speed flying down that hill. Wax rubbed on the runners helped minimize friction for even greater speed. Making that sharp right turn at the bottom of the hill on Daggett Street was a challenge. Fail to turn at all, and you might flip or fly over the bank and towards the woods.

The Scandinavian kicksled was a novelty. No one else owned one in Derby (population 300). Youngsters unfamiliar with the sled were quick to volunteer for a ride up front. Seat belts were not optional. Like cars in the 1950’s, the kicksled had none. You literally had to hang on to your seat.

Flying through the snow going down that hill on the kicksled was a thrill not easily forgotten whether as the driver or passenger. I do not recall any driver ever making that sharp right turn, so the ending depended on the driver’s braking skill mentioned earlier.

One of my 4 brothers, who I won’t mention by name, decided a run without any brakes would be exciting. He drove. I sat. Starting from a dead stop is no problem on a hill. Gravity and minimal friction meant you would accelerate. He decided running for 20 feet while pushing for maximum speed would be even more exciting, so off we sped.

I should have guessed he was serious about no brakes. He stepped off the rails about 20 feet before reaching the snowbank on the curve at the bottom of the hill, and rolled in the snow off to one side. Seconds later the kicksled hit and stopped instantly buried in the snowbank as I shot forward up and out towards the woods like from a cannon or catapult. Fun? Yes. Try it again? No thanks.

That beautiful Scandinavian kicksled would have made a great family heirloom. Unfortunately, it only lasted for about two seasons of winter fun. The memory, on the other hand, will last a lifetime.