Watching a John Deere at Work 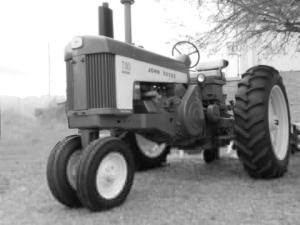 Milk was delivered door to door in the 1950’s Growin’ Up in Maine, and a visit to a dairy farm allowed watching a John Deere at work. Horses pulled plows and hay wagons 100 years ago. I never witnessed that, yet the size, sound, and muscle of a tractor was certainly a thrill to watch as a small town youngster in Derby, Maine.

Rickers Dairy practically owned the market for fresh milk and cream around Derby and Milo, Maine. Imagine quart bottles of milk routinely delivered to your doorstep. Waxed cardboard containers with pictures of missing children had not been invented.

The driver of the milk truck was usually one of the Ricker brothers who owned, worked, and managed at least 3 dairy farms. Eddie and Carl Ricker lived in Derby. Eddie was around the corner on Church Street in the village near my home. Carl and his family lived on the first Ricker farm about a mile from town on River Road.

As far as delivery, empty glass milk bottles were left on the steps, and often with cash tucked inside as payment. You didn’t have to worry about a thief swiping the money. Petty crime, disrespect, and greed were not commonplace because kids then were taught differently. We did not curse unless you classify “sons a buckwheat” or “baroid” as expletives.

Fresh milk in 1950 was not pasteurized or homogenized. Real cream floated and filled the top 4 inches or so of the bottle. The first glass of milk mixed with that cream was delightful. Another treat was milk and Ritz crackers served each morning at the Derby Grammar School. Those milk containers were half pint glass bottles without cream, and bring back fond memories of a simple yet tasty treat.

Years later as a teen, I enjoyed part time summer work for Rickers during haying season. Fresh cut hay was left to dry in various hayfields around the county until it was time to harvest the crop. The job involved a John Deere tractor pulling a hay baler that scooped up, baled, and tied heavy twine around each rectangular block of hay.

A flat hay trailer about 20 feet by 10 feet was attached behind the baler. The tractor, baler, and trailer was connected and pulled around the hay field like a mini railroad train.

The 75 lb. bales then fed off a conveyor while 1-2 other workers and I grabbed each one, and stacked them on the flat hay trailer. Imagine the hard work of keeping up while lifting hay bales over your head as the stack grew to 10 feet or more! It was a bumpy ride that required acrobatic skills including a sense of balance.

As each trailer load was done the next chore was a trip to the barn. A different and much larger conveyor belt carried bales to the top loft. One worker fed them onto the conveyor belt. Others in the loft stacked them again. We finally got a most welcomed lunch break. As a teen who loved milk, imagine “all you can drink” white and chocolate milk for free.

Watching a John Deere at work is one thing. Being part of the machinery doing the grunt work of haying season gives one a different level of respect for the hard work done by America’s farmers.