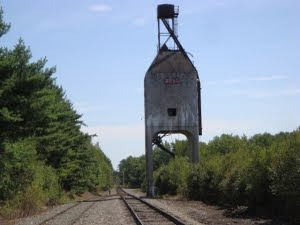 Iconic landmarks in Derby, Maine, bring back thoughts of small town living in the 1950’s like the railroad coal tower and pigeons.

I’m not old enough to remember steam locomotives on the Bangor and Aroostook Railroad that would have used the coal tower in the photo shown.

Look closer and you can see the railroad’s Iron Bridge in the distance.

As kids, we passed that landmark coal tower many times on the way to the Iron Bridge that spans the Piscataquis River from Derby to Milo, Maine.

That area was secondary to Down Back, our regular summer playground on the Sebec River which joins the Piscataquis near the Iron Bridge. Downback was a half mile upstream from where they converge.

This other corner of Derby still provided adventure. Walking the rails while imagining yourself in a circus high wire act was always fun. We’d have contests to see who could go the farthest without falling off.

Passing that coal tower meant stopping for a childhood ritual. Pigeons lived there.

Chunks of granite rock in the railroad track bed were just the right size for tossing. Our target was the iron coal chute shown in the photo hanging down beyond reach, and a direct hit would create a rock-on-metal Ka-BOOM.

Then we’d wait for a reaction.

If that didn’t work our next target was a large opening positioned even with the large red sign shown, yet to the left facing the tracks.

The opening was up 20 feet or higher, so several tries were needed for success tossing a chunk of granite through that opening.

A direct hit usually worked. The disturbance would cause the flock of pigeons living inside to panic and all would fly out of the opening.

City folks may not “get it”, but that formation of pigeons making an exit, flying in a wide circle for a minute or two, and then coming back to roost was entertainment to us youngsters.

I suppose as government has managed to come up with more and more civic ordinances over the years, you might get arrested for that nowadays.