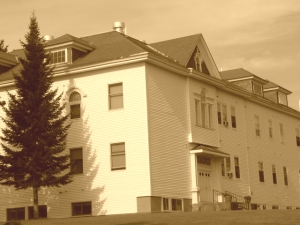 Digging deep into the past of life in a small town in Central Maine brings back memories of good times down at Papa Joe’s in 1963.

The Milo High School building photographed in August 2011, and shown here in sepia, was MHS until 1968.

Besides pizza, soft drinks and a pinball machine, Papa Joe’s had a jukebox that played 45 rpm records.

A recording that made #9 on the Billboard Charts in September 1963 was an instant hit at this 1960’s teenage hangout.

Listen now to Down at Papa Joe’s by the Dixibelles as you continue to read.

Wow! That was 49 years ago this month! That bouncy tune that we played over and over in 1963 sounds more like music from an earlier era like the 1930’s or 40’s. Not to worry.

Within 6 months of Down at Papa Joe’s being in the top 10 on Billboard, the British invasion introduced the Beatles in 1964 and rock music was changed forever! Our parents agonized over the new sounds, and made fun of lyrics much as we did criticizing their childhood tunes.

They laughed and ridiculed lines like “Well I’ve never been to heaven… but I’ve been to Oklahoma” just as boomers shake their heads today over a new generation using expletives in lyrics.

The pinball machine at Papa Joe’s brings back another memory. It was a dime per game and free games could be earned by achieving a minimum score, or multiple extra games for racking up even higher points. My youngest brother and I set what I believe may be a Papa Joe’s record for continuous play on a single dime.

Taking turns after a half hour or more each on that first dime, we continued to rotate and kept the game going for 12 hours. One dime. 12 hours. Unlike youngsters today who could match that with a handheld electronic game, other days we played real football on real grass for 12 hours, too!

As times change, pizza, music and pinball as entertainment provided a level of innocence that we can only recapture in fond memories. Disaster struck Milo 45 years later and in the same month that Down at Papa Joe’s was a hit in September 1963.

A fire set by an arsonist on 14 September 2008 erased many of the landmarks on Main Street in Milo. That fire destroyed half of the businesses on the west side of Main Street. Though memories may fade, recollections of moments like good times down at Papa Joe’s in 1963 will last forever.