Is It a Bird Is It a Plane 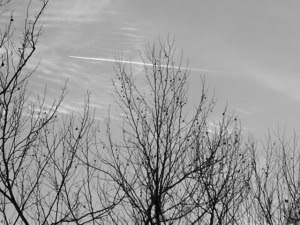 High altitude exhaust trails from aircraft flying by was rare in our neck of the woods Growin’ Up in Maine back in the 1950’s. Television brought the prospect and reality of flying closer to home and easier to imagine.

Space related shows like Buck Rogers gave rise to reports of UPO sightings, and the cold war kept people on edge, too.

The phrase “Is it a bird? Is it a plane? No! It’s SUPERMAN!” was a well known opening line on television with George Reeves as Superman. Us kids would point and repeat that same phrase on the… again rare occasion a jet would fly over.

Jet planes at 20,000 feet were a mere dot and silent at that distance, so the only evidence of life was their trail of smoke marking the sky. I first rode a jet at 19. I last rode one at 59. Drugstore rides at a dime don’t count.

As kids, our idea of high altitude was climbing a 50-75 foot pine tree to scout the countryside from an eagle’s point of view. A lucky few from our neighborhood enjoyed the adventure of climbing the 5000 feet up Mount Katahdin in Central Maine. That’s gorgeous, too.

Looking back and recalling simple moments of childhood wonder, I believe most Maine boomers long for the past because they truly love and appreciate that place and time Growin’ Up in Maine.