Not So Funny Practical Joke

Posted on February 1, 2014 by Jim Degerstrom 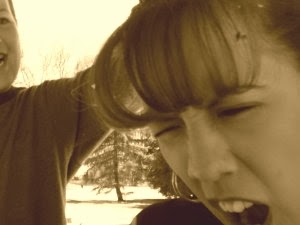 Childish juvenile pranks can sometimes backfire. Pull my finger is harmless enough. You become the victim once, then pass it on.

One of the Hogan boys, not naming names, came up with a not so funny practical joke he thought was really cute.

His trick involved getting “caught” picking his nose.

Standing nonchalantly in front of someone, he buried his middle finger up to the first joint aggressively digging deep with his boogar hook.

Next, he would quickly extract the finger, reach out with that same hand and pull a switch by extending his index finger instead.

He would immediately wipe that clean finger on the other person’s shirtsleeve.

The illusion worked every time. A shocked or angry reaction was predictable as everyone else burst out laughing.

Once you were a victim of the switcharoo practical joke, it was entertaining to watch him pull it on someone else.

To his credit he was quick to demo what actually happened – especially to the angry victims, and everybody had a good laugh.

Not so funny was the time he was too slow to explain and a guy retaliated in silence… with a right hook to the face.