Posted on September 7, 2014 by Jim Degerstrom 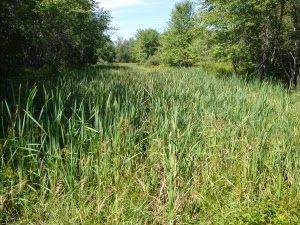 In 2012 I wrote about the coal tower at the B&A Railroad Shops in Derby, Maine, as viewed from the Iron Bridge.

Flashback to the 1950’s. That coal tower was surrounded by a wonderland within a quarter square mile.

Viewed from the bridge and to the right of that tower through a small stretch of woods was the baseball field.

Again, to the right further along and next to the tracks was the playground and tennis courts, plus the old hotel on the hill.

Past that, and still on the right was the Derby Pond aka Lake Edith shown here except 50 years later, plus drained and overgrown.

Unless told, my friends from that era could not recognize or identify that as Derby Pond from this photo.

A tad further was the Derby train station. Past that on the right a gorgeous park with large rocks painted white went the length of the village.

Not much for a simple small town. Fact is, that little piece of real estate was a childhood wonderland that provided 100’s of kids 1000’s of memories that last to this day.

Except for the coal tower, everything described “on the right” from the 1950’s is gone, drained, overgrown, or demolished.

I wouldn’t trade that childhood for all the gold in the world.