Posted on September 9, 2015 by Jim Degerstrom 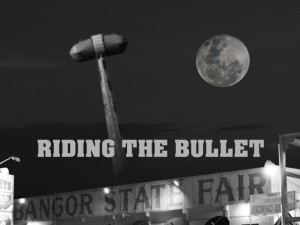 A memorable and thrilling 1960’s moment Growin’ up in Maine was riding the Bangor Fair bullet carnival ride with my brother.

The ride had two bullet shaped compartments at opposite ends attached to a shaft that rotated on one axis like a ferris wheel.

Capacity was two riders in each “bullet” as shown in the illustration here, so four total. The second bullet is not shown.

Each compartment had a steering wheel that controlled the ability to do a barrel roll to the left or the right at any time.

The ride moved super fast yet done properly, you could ascend towards the top of the arc and across the top right side up.

Rotate 180° on the way down and you passed the bottom vertical supports seated right side up, much like a Sunday car ride.

One person had control of the barrel roll. I was the driver and my brother the passenger, a decision he would later regret.

Sunday car ride? No thanks. I went opposite of normal. We crossed the top upside down and upside down again at the bottom.

The descent was the best. At 40 mph the ground doesn’t disappear as you watch it speeding at you a foot away and upside down!

Round and round we went. Brother screaming. Stop! Cut it out! No more! He lost a fair amount of spare change on that thriller.

Footnote: I am one of 5 brothers, 3 older – 1 younger. The victim was an older brother, a decision that I would later regret.