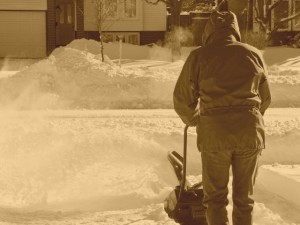 Up to my late teens the only solution for most folks was a shovel long before personal snowblowers became common.

From my youth, and without regret, all I recall is the hours of hard work after a storm shoveling paths and the driveway.

Unlike today, kids in the 1950’s enjoyed the outdoors and physical activities like shoveling snow as a part of life.

Later, with 4 of 5 boys emancipated, Dad bought a snowblower and added a sliding door to the side of the back shed.

After a storm he would slide open the door, fire up the snowblower, and drive into the snowbank making a path to the car.

In my mind that was useful technology compared to today’s array of electronics that result in youthful couch potatoes.

By comparison, my doctors have stated at 60+ I’m healthier than most people half my age and could easily live to 100.