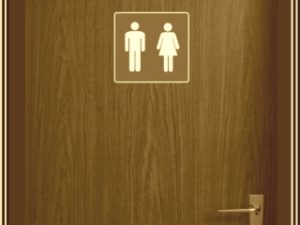 In Switzerland and enroute to military duty in Africa I encountered some serious bathroom confusion in 1968.

Being from a very small town Growin’ Up in Maine in the 1960’s I wasn’t prepared for European culture shock.

Needing a break I found this sign on the bathroom door and was thinking ‘That’s a little too liberal for me’.

Recently the reason for co-ed bathrooms became very different. Gender identity is optional nowadays? Not then.

I squirmed. Crossed my legs. Not ready for this, I finally had to give in. Note: Depends weren’t invented yet.

Imagine opening that door and entering a room with couches, chairs, and mirrors. No urinals and no stalls.

Ladies were putting on makeup, and groups of people were socializing. Two more doors had separate silhouettes!

What a relief. Separate for boys and girls! I hurried to the mens room door, and saw nothing but men inside.

Was this a Candid Camera stunt? No. Just the Euro way of handling co-ed bathrooms in a decent civilized way.

Seems like a good idea for 50 years later to solve the current transgender identity hogwash seen in the news.

Old timers may recall two-seater outhouses. I do, yet it was never a co-ed experience. Oh, the good old days!