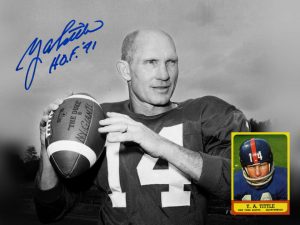 I played backyard football during the 1960’s pretending to be football hero Y.A. Tittle who passed away October 8, 2017, age 90.

He played quarterback for the NY Giants from 1961 to 1964, and held the single season record of 36 touchdowns for over 20 years.

The New England Patriots did not exist back in the early sixties, so most youngsters Growin’ Up in Maine cheered for the Giants.

With me as quarterback playing on Clark’s lawn in Derby, younger brother Eric caught just about anything tossed in his direction. Another 90 year old football hero passed away 17 years ago this month. That was my Dad, Theodore Earl Degerstrom, Sr. (1920-2000).

Y.A. and Dad were tough. Dad was a running back at Milo High School, and loved telling about being knocked out 3 times in one game! Dad was an avid sports fan. He cheered for the Red Sox, and later the Patriots. Neither won a championship during his lifetime.

Then again, maybe he had a day pass from heaven with front row seats for the Sox and Pats. Maybe chatting with Y.A. as I type, too.