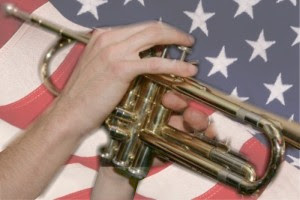 When playing trumpet as a member of the Milo High School band back in the 1960’s, the senior band was once invited to New Hampshire to play at a football game half time for a school that couldn’t afford one.

Likewise around home in Piscataquis County we performed double duty on Memorial Day. We were the school band in the Milo parade and then bussed off to Brownville Junction to march and play in theirs because they had no band.

For the first parade we were the only band taking part in the Memorial Day parade up Main Street in Milo then on to the cemetery at the outskirts of town. We waited there while standing at parade rest as the names of all service members from Milo who died in every war back to and including the Civil War were read off.

Okay, so it was a small town and the reading only took about a half hour. At the end of the cermonies a soloist hidden 50-100 feet away played taps. It hit home being a bit more personal as a spectator in 1968 just a year after graduation as classmates of mine killed in Viet Nam were added to the list. That summer I enlisted.

Backing up to when I was in the band, after the Milo parade we boarded a bus or two and headed for Brownville Junction. The parade route started south of the cemetery on the side road just past the fire warden station and was less than a half mile into the middle of the cemetery. The cermony was usually brief and then back to Milo and done for the day.

God bless those who gave their lives for the freedoms we enjoy in America today. It took 4 years in the military and travels to Africa and Southeast Asia for me to fully realize our country is truly blessed.