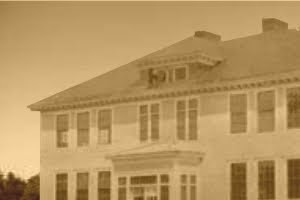 Two years ago a previous audio story by guest storyteller Larry Hall mentioned ringing the steeple bell at the grammar school in Derby, Maine, as a prank. That was at night pulling a rope.

Here’s an alternate ringing of the school bell from around 1927 when Larry was 10 or 11 years old. Larry and I both attended that grammar school except 35 years apart.

This audio story is actually about McKusicks General Store, yet an alternate title could have been Ringing the Derby Grammar School Bell Episode Two, but that one was way too long. Here’s some background info.

The only 4 corner intersection in my home town of Derby was at the foot of Derby Hill. Staying straight ahead down Derby Hill going south as you enter the village was the Ferry Road. The River Road was to the right headed west, and if you went left it was east on Railroad Street. Years later when they assigned street numbers (go figure), our home was 10 Railroad Street.

Side Note: One neighbor on our street caused a firestorm of gossip and snickering. Reportedly after street numbers were assigned, she did a change of address with all her contacts and was receiving mail to Railroad Boulevard. Yes. Boul-e-vard. That was mighty highfalutin for a small town, population 300.

The Ferry Road and River Road had stop signs, so the turn on Railroad Street was made without stopping when going in either direction to or from Milo. The grammar school was on the northwest corner and McKusicks General Store was diagonally across the intersection on the southeast corner.

With that layout in mind, picture a wooden boardwalk across the front of the store like in old westerns, and that’s where Larry and friends stood while ringing the bell. He mentions a side story of the American Thread Company horses and bells of the 1920’s in Milo, too. The company made wooden spools for thread.

Sad to say yet before you traipse off to Derby to survey the scene, that boardwalk was long gone before my time, and the store and school are now gone. Compared to Larry’s previous story, this version of the Derby Grammar School Bell happened in broad daylight. Listen now to learn how they rang that school bell.

Contributed and narrated by Larry Hall, Ten Decades of Stories
Thank you, Larry, for sharing memories of what it was like Growin’ Up in Maine in 1927.